Words are the most powerful weapons a human being can possess and their power is taken for granted, neglected, and irresponsibly wielded on a daily bases.  Now, I’d like to say that people don’t understand or fully recognize how impactful their words can be but that would be a lie.  The cliché that ignorance is bliss helps to reinforce that lie.  We can be quite crafty creatures when we want to be.

For example, when someone is angry, they know exactly what to say in an argument to hurt or damage whomever it is they’re angry with.  When someone is passionate about something they believe in, they find the words to say in an attempt to persuade another person or a group of people to agree with and join them in their cause.  So it would be fair to argue the point that people do know the power of their words when it’s convenient for that power to be acknowledged in order to get a particularly desired result.

But we can be so hypocritical at times.  Can’t we?  On one hand, it’s okay for someone to speak their mind as long everyone believes the same thing and agrees with what’s being said.  If I’m happy, you’re happy and everything is right with the world so we can hold hands and get along.  On the other hand, people have been coerced and shamed into silence because of someone else’s inferiority complex, misplaced judgement, or inability to see a situation from a different perspective.  They’re told that their words don’t matter; that they’re insignificant because what’s been spoken is making a majority of folks uncomfortable.  We listen in order to design our response, not to hear what’s being said.  We’ve lost the art of effective, productive communication.

At the end of the day, I’m a firm believer that whatever is spoken into the atmosphere will manifest.  It doesn’t matter whether the person speaking has said something positive or negative; it will show itself in some shape, form, or fashion.  In the world we live in today, it’s become commonplace for words to be tossed back and forth with no regard for the seeds being planted or the harvest that will come behind what’s been spoken.  There’s no respect for what we speak over and into one another.  We react before we assess.  It’s about striking first before being stricken.  It’s about self-preservation.

My hope is that Thinking Out Loud will begin to reshape and change the way we use our words on a global scale.  I desire for the art of true communication to be restored. This month we’ll be speaking with different authors in the literary community about their past and present projects, as well as how they feel we can go about being and bringing the change we all say we want to see.  You have the power of life and death in your mouth and you can create or destroy with that power. You have what you say.

So, what are your words doing?  What are you saying? 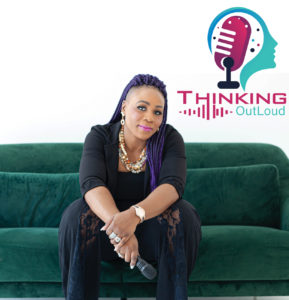